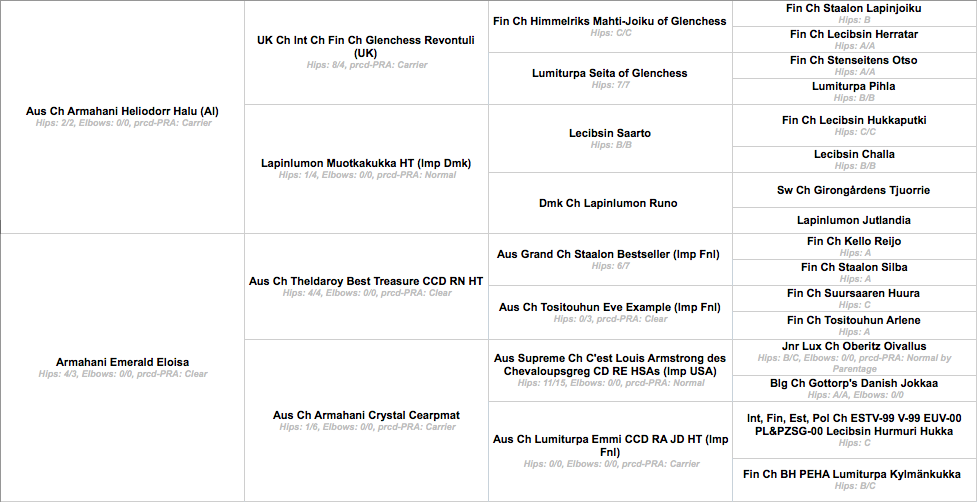 Mowgli was the smallest pup I had ever had born, but he quickly showed himself to be a tough little character, and within a couple of weeks he had surpasses a couple of his brothers in size.  Everyone who visited the litter once they were up and about just fell for this cheeky boy.  Very people focused, very confident and playful, he seemed the perfect pup for a family with a couple of active boys!

Sleepy litter Taavi often made us laugh, because while he'd be in the middle of all the play and action of the pups, after a little while had passed, we would notice we were down a pup, and sure enough, little Taavi had made himself to bed, and was fast asleep.  Live hard, sleep hard had to be his motto.  He has a wonderful family with two young children to share those play and nap times with now.

Bomber was the first to strut around the whelping box, vocalising, and telling off the toys, and generally being quite the character.  One of the more active and confident pups, with a cheeky personality, he was usually the first into most things.  He goes to live with Vivien and Gavin, who were after an active boy, who will grow to be a running companion, and we think little Bomber will quickly win them over.

Uno was our gorgeous little boy in the litter, as cute as a button, who once I started putting them up on the table very very quickly caught the eye.  Everyone who had a look at them agreed that he was the one to watch, and so I held back on finding him a home.  I expected to run him on for a little while, but along came Samantha and Shang, keen to know more about what it would entail having him in the show ring, and only a week after his siblings left, he went off, leaving me with an empty nest once again.  He will join us in the show ring, and I look forward to having a "little boy" to show again .. let's see if he can match his great-grandfather in that endeavour!​
Uno's Page

It was hard not to be in love with my little bear Loki, right from the start.  Looking more like his dad, than his dad did at that age, and very quickly causing me to call him "fat boy" he lived up to his litter name of Baloo in every way.  I had an exception soft spot for him, and did seriously contemplate keeping him at home for quite a while. In the end though, I offered him to Nicole, who has been a quasi member of the Armahani family for quite some time, to live with his Uncle Dexter.  He lives up on the Vic/NSW border and may have a few show outings up there on occasion.
Loki's Page

Registration: 3100339913 | Microchip: 953010000880645
Gender: Female | Colour: Black with Tanpoints & White
prcd-PRA: Carrier | GSD-II: Clear by Parentage
Owned By: F Boal & J Lincoln
​
Violet was the only girl in the litter and the last born, so we had almost given up by the time she arrived!  Normally single girls in a litter of boys quickly emerge as  rough and tumble pack leaders, bossing all those brothers around. But Violet always was the innocent, sweet princess of the bunch.  She is off to live with her mother Vaalia.
Violet's Page