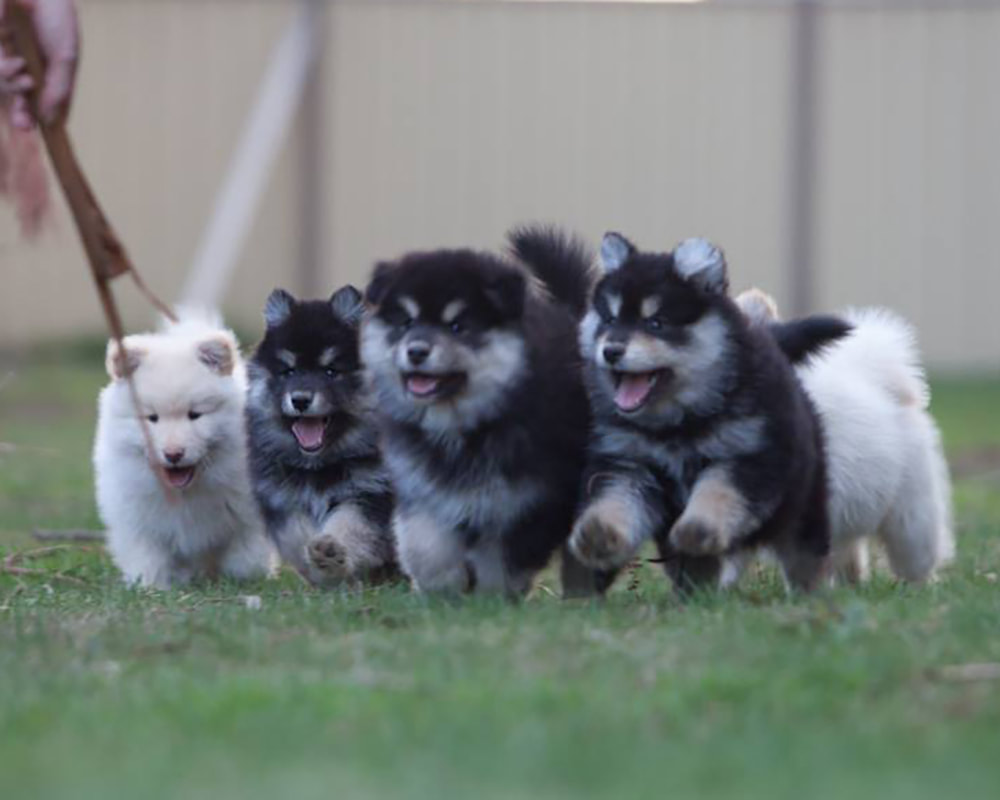 Gypsy, Akela, Solo and Loki at play (Fleur behind)

Solo got plenty of attention right from the start, and we were pretty sure he was a bit of a daddy clone from early on.  Handsome and full of lots of character, we thought he would make the perfect match for Nik's next lappie ..... and first boy lappie ..... and from all reports is living up to his promise.  He has lots of training fun, and lots of sports fun ahead of him, as well as some show outings
Solo's Page

Finnick, with his big broad head, and half mast eyes, gave the appearance of being the softest and gentlest of the litter, until he his about 6 and half weeks, and then boy oh boy.  Mr crazy, cheeky, with super sharp teeth that aimed for noses, made an appearance.  The funniest, most adorable pup, he now has a young family to adore him and I'm sure will be in his element.

Pretty little Fleur was the most outgoing and people focussed of the litter, always giving the best kisses! She was a little crazy, a little silly, but oh so loving, ready to adore and be adored.  So we thought she would make a great match for her lovely family in Tasmania, with a little girl to be her BFF all her life, as well as some land to run and play in.
Fleur's Page

I always have a soft spot for one of the litter, and this time it was Akela (aka my little Dukey).  He was the comic character of the litter from the beginning, but with such an adorable face that you couldn't help but want to smother him in cuddles and kisses.  Smart as a whip, he has gone to live with Jan and Rod, and engage in a lot of training fun, and from all reports is already learning many new skills.

Gypsy was our sweet princess of the litter.  She would often sit at our feet, just waiting to be picked up and snuggled, with her sweet little gaze and adoring eyes.  Pretty as a picture, she moves to Queensland, to live with her big Lappie brother Jari.

If Solo was his daddy's clone, Link is her mummy's.  Very much like Squiggle from day one, with a similar expression, similar head, similar body size and type, and similar level of crazy, it was a little inevitable that she would end up going home with her.  She has more food drive and a bit more people focused that Squiggle at the same age, so the world is her oyster, and I'm sure Shell will have her training up for a lifetime of dog sports fun very soon.
Slinky's Page

Loki caught us a bit unawares.  I often say that it is those darker, smaller boys that trick you.  You start to overlook them amongst their flashier, more marked brothers, and then as they start to grow you end up going "hold on a minute".  Loki was one of those, so by the time he was 7 weeks old I had realised just how nicely he was put together, and wasn't too keen on letting him go.  Luckily Tracey was looking for her first show dog, and jumped at the chance to own this character, with plenty of crazy to make training him lots of fun.