Registration: DN39302203 | DOB: 17/01/14 | Colour: Wolfsable
Sire: Can Ch Shadagrace Cassbar Sir Vernor
Dam: Am Grand Ch Calaban's Armahani Rakentta
Hips: 2/2 | Elbows: 0/0 | Eyes: Clear 2014, 2015, 2016; Cataracts 2018 | prcd-PRA: Carrier | GSD-II: Clear |CDM: Clear
Bred By: C Brillinger | Owned By: J L Lincoln
When Kit bred Bindi to Can Ch Shadagrace Cassbar Sir Vernor, a handsome boy who along with his siblings had had quite some show success, and from a combination of known successful show lines and much rarer, older lines, I was watching very closely. Making a decision was pretty hard though, and I can't thank Kit enough for letting me debate back and forth, and for running on her favourite girl from the litter while I made my mind up.

Baby is an incredibly pretty girl, moderately sized, with lovely structure, glorious coat, a divine head and expression and beautiful effortless movement. She is incredibly affectionate and friendly, loving all she meets, with such a sweet temperament that everyone just completely falls in love. She is also cheeky and fun loving, and with a real streak of her great-grandmother's queen like tendency (don't let that innocent face fool you!)

She was shown sparingly while in the USA, proving herself to be quite a contender for catching the judges' eyes. She has a number of class in group and show wins under her belt, and quickly made up the points she needed to title, including three majors. She even managed to defeat her Best in Specialty winning American Grand Champion mother at a couple of shows, which I certainly never expected.
​
In Australia she hit the ring with a bang, literally!  Her very first show, the Finnish Lapphund Club of NSW's championship specialty, showing in the Junior class, she took Best in Show!  She followed it up the next day with Reserve Bitch Challenge at the Sydney Royal.
​
The years since have been full of fun together.  Royal challenges, another big specialty win (RUBISS under an international breed specialist), titles and qualifications in a number of performance sports, her international championship title, the list goes on, and the fun continues.

She had just the one litter before a diagnosis of star cataracts in early 2018, following three clear eye tests - a result which was just devastating - and subsequent early retirement from breeding. Instead she continues as my training and trialing companion. 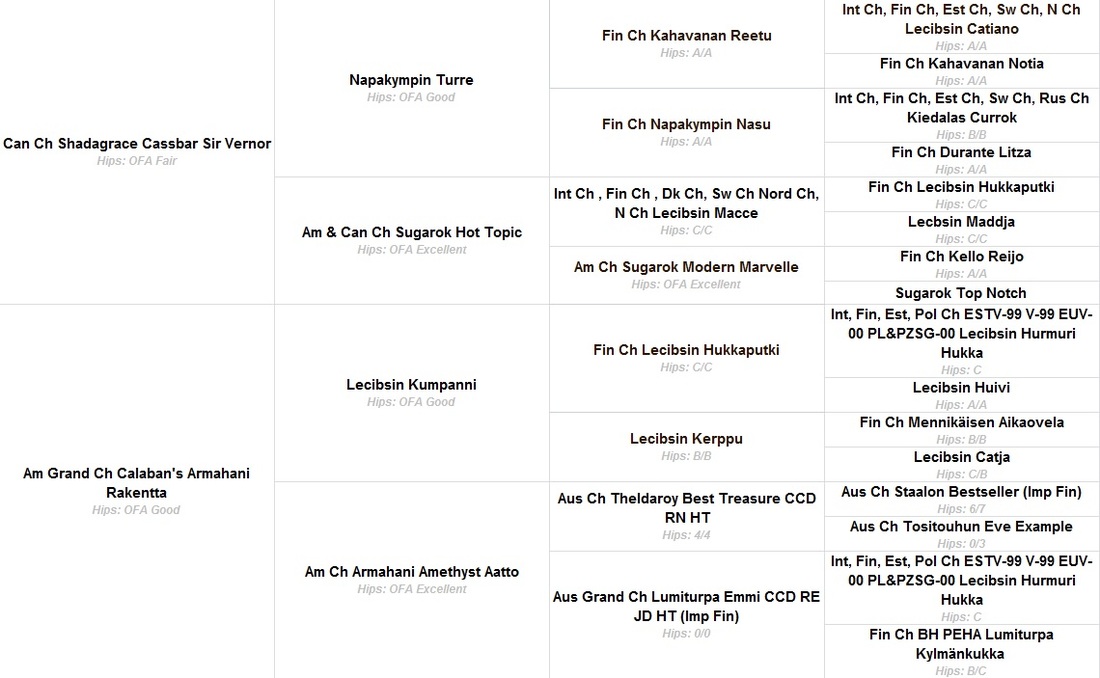